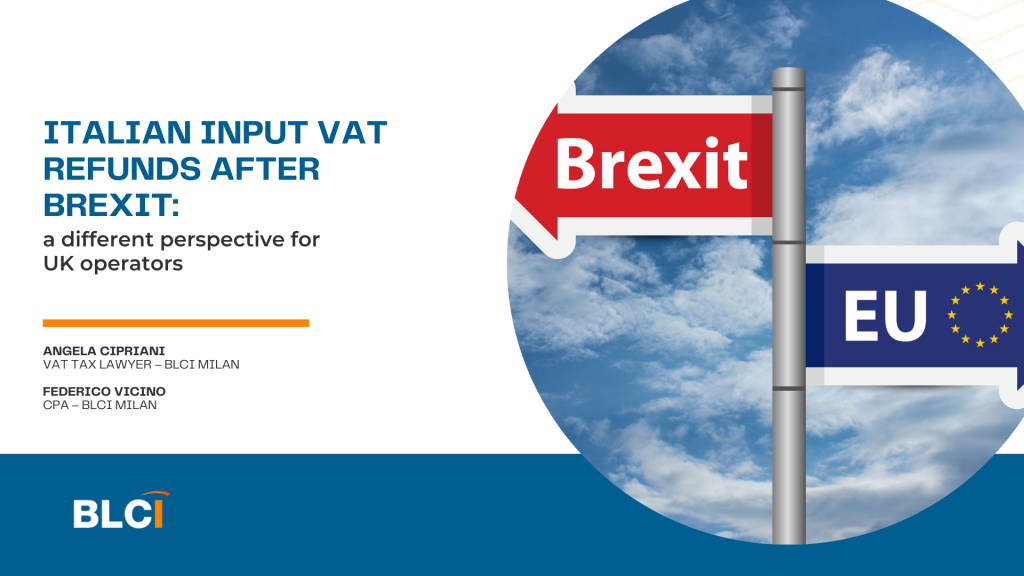 Italy has signed reciprocity agreements with Switzerland, Norway, and Israel. But a good interpretation of the Italian tax landscape cannot exclude that the condition of reciprocity required by the Italian legislation is satisfied also for UK operators

First, the Withdrawal Agreement contains clear provisions on the exchange of information and broad VAT collaboration between the EU/UK: on this point, the Italian tax administration confirms that the withdrawal agreement can be considered substantially similar to the administrative cooperation instruments in force in the EU and this circumstance allows taxable persons established in the United Kingdom to access the institution of direct VAT identification (art 35ter of the Italian VAT act)

On the other hand, the procedure applied by the United Kingdom for the reimbursement of input VAT in that country – as provided by “VAT Notice 723A” issued by HM Revenue & Customs  – is very similar to that provided for by Italian legislation;  it provides that, when completing the application form, the non-resident and not established in the United Kingdom must state that:

In light of the above, UK companies will be able to continue to operate within the Italian market with the possibility of having the VAT paid therein reimbursed and, last but not least, the possibility of identifying themselves directly that, substantially, represents a point of access to the European Union market.

This website uses cookies to improve your experience while you navigate through the website. Out of these, the cookies that are categorized as necessary are stored on your browser as they are essential for the working of basic functionalities of the website. We also use third-party cookies that help us analyze and understand how you use this website. These cookies will be stored in your browser only with your consent. You also have the option to opt-out of these cookies. But opting out of some of these cookies may affect your browsing experience.
Necessary Sempre abilitato
Necessary cookies are absolutely essential for the website to function properly. These cookies ensure basic functionalities and security features of the website, anonymously.
Functional
Functional cookies help to perform certain functionalities like sharing the content of the website on social media platforms, collect feedbacks, and other third-party features.
Performance
Performance cookies are used to understand and analyze the key performance indexes of the website which helps in delivering a better user experience for the visitors.
Analytics
Analytical cookies are used to understand how visitors interact with the website. These cookies help provide information on metrics the number of visitors, bounce rate, traffic source, etc.
Advertisement
Advertisement cookies are used to provide visitors with relevant ads and marketing campaigns. These cookies track visitors across websites and collect information to provide customized ads.
Others
Other uncategorized cookies are those that are being analyzed and have not been classified into a category as yet.
ACCETTA E SALVA